I went to Mesa Verde once as a kid, a very long time ago. I’m pretty sure we did the Cliff Palace tour and I remember being incredibly disappointed that I couldn’t go climb around in the ruins and explore. I still want to climb around and explore, but now as an adult I realize why it will never happen, and it’s okay. Beyond that, the only thing I remember is that the toy I got in this park was a little fuzzy plastic horse (you know, the kind they cover in sort of velveteen stuff to make them soft?) whom I named Anasazi, after the people who inhabited Mesa Verde long ago.

These days, the people are no longer referred to as “Anasazi” but rather as Ancestral Puebloans. Anasazi is a Navajo word that has been interpreted to mean both “ancient one” and “ancient enemy,” and many other tribes descended from the Ancestral Puebloans felt that using a Navajo word for their forebears was unfair and inaccurate. So, the Park Service has started using the newer term and I think it’s a better fit, but I don’t think I’ll rename my little horse.

We rolled into Mesa Verde in the late afternoon and spent most of the remainder of the day hanging out in our awesome campsite. It was honestly one of my favorite campsites I’ve ever stayed in! The next morning unfortunately dawned wet and cold (we’re cursed, I swear) but we headed to our 10am tour of Cliff Palace regardless! (Well, not entirely regardless. I was pretty grumpy about it and I gave it many regards.) In the early days of the park, the NPS went in to stabilize the large crack you can see in this photo, but when they got underneath the tower they discovered that the Puebloans had already stabilized it. They were absolutely incredible builders. That’s the original wood from over 600 years ago. This place blows my freaking mind.

Original artwork that has survived the test of time thanks to being inside the tower. So incredible. This is Spruce Tree House, which is normally one you can tour, but it’s currently closed due to rockfall hazard. I hope they reopen it so I can go see it, it looks incredibly cool.

I’ll admit it- more than almost anything in the park I want to rappel into this dwelling and explore. The jugging out probably wouldn’t be as fun, but this ruin is pretty inaccessible without ropes. It blows my mind how those people were able to scramble around these cliffs with no sticky rubber and no ropes!

This ruin was one of the last things built by the ancestral Puebloans in Mesa Verde, and built on the mesa top in a different style than any of the other buildings. It was unfinished, and archaeologists and historians can only speculate about its purpose.

After exploring on the mesa tops in the sunshine, it was time for our tour of Balcony House. Of course as soon as we headed over there the clouds started rolling in once again! Haha. At least we got a little sun.

Balcony House was INCREDIBLE. An absolute must-do tour and one of my favorite parts of the whole trip, despite the rain (and possibly BECAUSE of the thunder rolling through the mesa while we toured the dwelling). 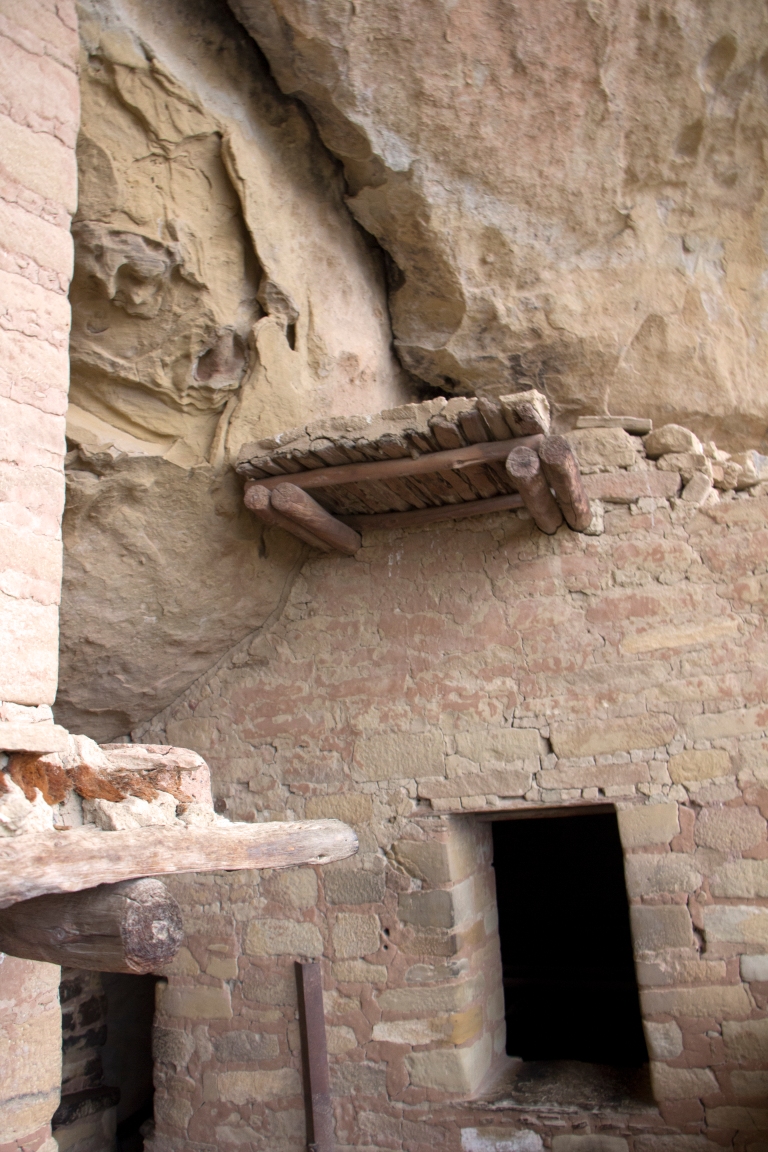 I’ll admit it- I could not stop freaking out over all of the original wood.

“Dr Groves” (someday! …you gotta get your “Docta Jones” German accent on for full effect) telling me all about how this was once a door that was covered up. Originally Balcony House was one large dwelling for a single large extended family but over time was split up into smaller dwellings. I mean… duh.. who wants to live in the same space as their mother?? (JK mom. But not really.)

More original artwork!! (The designs in red… not the random number 24. Ha.)

This camera brings the artsy-fartsy back out of me. I’m obsessed with this picture of my cute, nerdy, history-loving, adventurous husband. He is without a doubt the best man I ever could have married!! (Okay, sap over.)

This photo does these autumn leaves simply no justice. It was mind-blowing. On road trips I tend to do a lot of half-yelling “IT’S SO PRETTYYYYYY” and this was absolutely no exception. Fun story: our first night in MV was cold. Borderline too cold. It got down into the low 40s and our bed also partially deflated (boo). So we decided to go and buy a bunch of blankets and a new mattress and such at the Walmart in Cortez. This turned out to be an excellent decision as the overnight low was like… 26? 27? and we stayed perfectly toasty. We had about 5 or 6 blankets on top of us, including our sleeping bags, and our bed stayed inflated! But it was definitely a chilly morning.

This little dude was chilling on our tent when we went to pack up. We both found it pretty odd that he would still be a caterpillar this late in the year, but perhaps he was planning to make a cocoon for the whole winter? I’ll admit that we meant to do some research and haven’t, but it was a very curious thing. Also just had to get the classic “Brady holds something up to his face for closer inspection” shot. 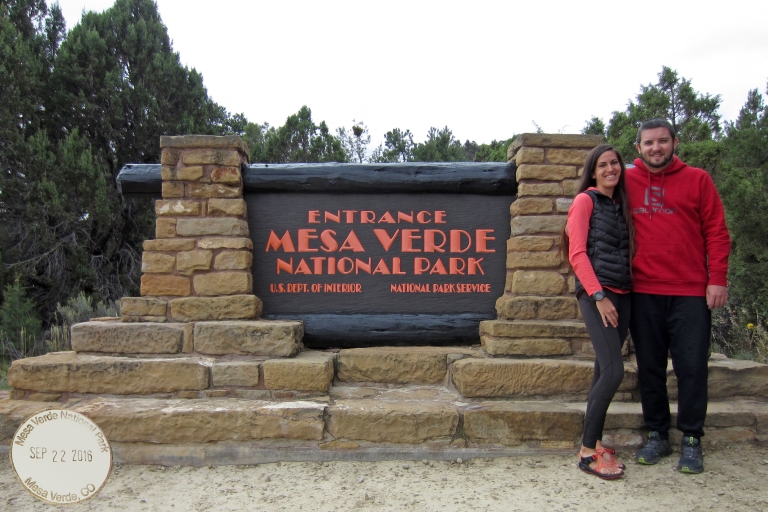 We can’t WAIT to come back to Mesa Verde in the summer, and spend some more quality time there!

Our Mesa Verde National Park “Must Do”:

The Balcony House tour!! Even though it has a few bits that might bring pause to someone with a fear of heights (climbing tall ladders), it’s incredibly safe, and you get a much more immersive experience than you do in Cliff Palace. We’d highly recommend purchasing your tickets at the main visitor center and making sure you fit through the tunnel they’ve set up to represent the tiny crawlspace at the end of the tour.